Streamer & Social Media Manager
You are using an out of date browser. It may not display this or other websites correctly.
You should upgrade or use an alternative browser. 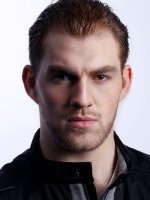 Streamer & Social Media Manager
Koldin D. Collie is a social media manager and one of the hosts of the official Deadhaus Sonata stream. Koldin, by trade, is a professional actor working in Film, Television and Theatre. He attend four years of training at the Ryerson School of performance, where developed a love of Dramatic combat and Stunts. Koldin holds a certificate with recommendation in Advanced Stage Combat from The Academy of Dramatic Combat. Koldin continues to hone his craft regularly as a student with AMAW Toronto, and Violence in Motion.
Blood Poll
The Herald beseeches all members of the house to tell us your thoughts. How does our blood look thus far? Is it too much, just right, or not enough?
To cast your vote, head over to;
https://toomuchblood.paperform.co/
Lord Ngaztak looks forward to hearing your thoughts. Fight the living!
Continue…
Community Deadhaus Sonata Visuals
Top Bottom