About the legacy our characters will forge for the world

There's something huge I want to ask. Each time I see these lines on a Deadhaus Sonata thread/website : "... How your character fits into the complex political system of the world. You make choices that have a lasting, maybe even permanent, affect on your character, and potentially on the world at large","Narrative driven","Twitch integration" and every words on the page that explains the ages, I get excited.

As far as I know, only one game has a system where the devs are making the world, creating factions and backgrounds, places and some characters... and that's it. Beside this, it is the players that forge the story and the events of this game. This game is EVE Online.

From the moment you finish the tutorial, you can be/do whatever you want. You can raid, exploit, protect, transport, research, explore, build, destroy, etc. If a corporation, or even a signle player, manage to do astounding exploits, it can be part of the official lore. Not an NPC character created for the plot, a obscur god or even the migthy hero of the prophecy, no. You, the player, you're going to get your name in the book. And speaking of books, an author have summarized the exploits, facts and events of many players and corporations in EVE Online : How wars started, the consequences, the break and birth of new or old alliances, etc. The first book is about the first decade (2003 to 2011 if I'm correct), the second one is coming this year. There's a chronology and even artwork of some of the most notorious players of that time.

Here are there examples from the first book. 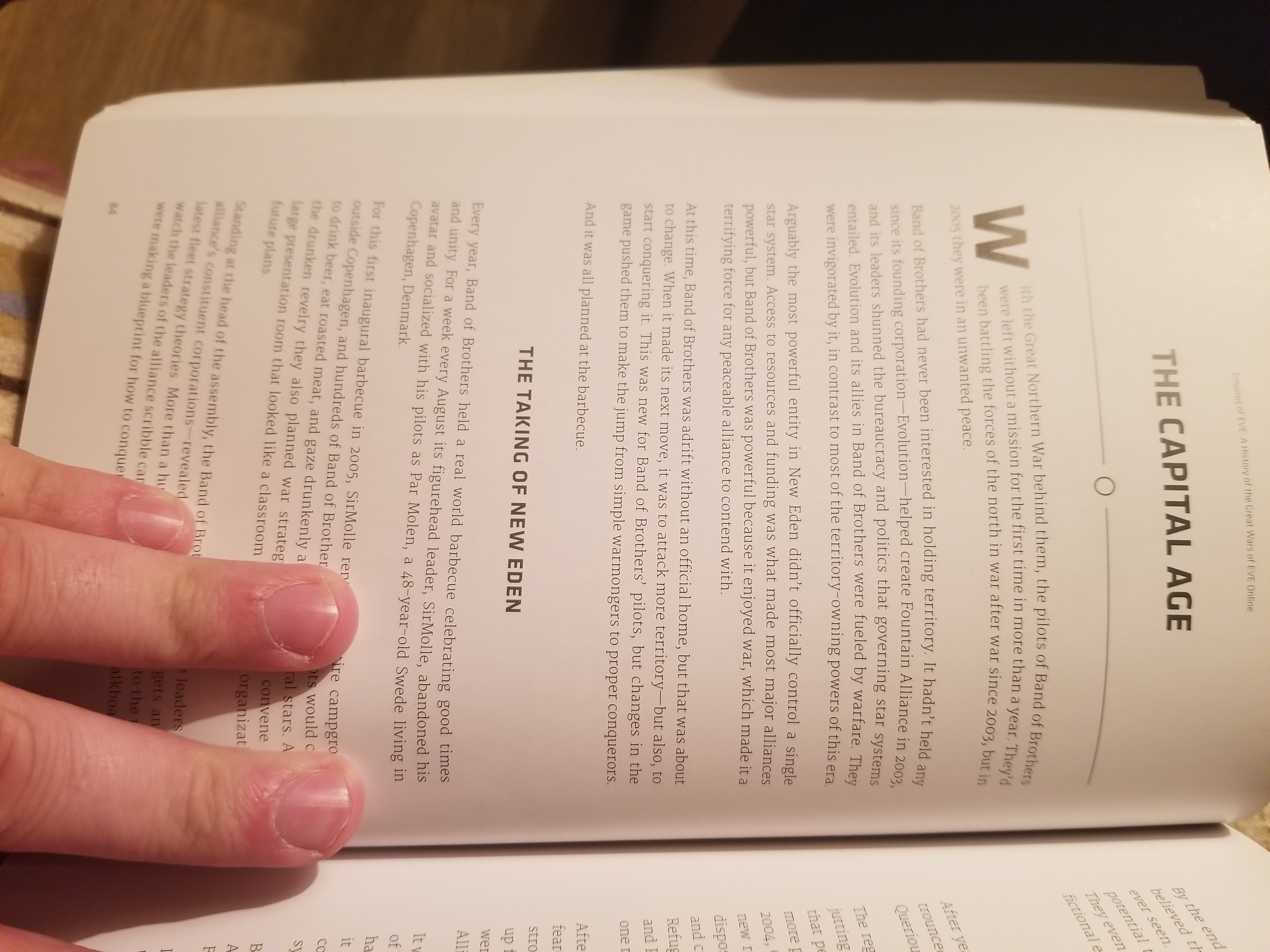 All of this text to simply ask... will something like that be possible on Deadhaus Sonata? Will my name ever resonate on the echoes of time if I do great deeds? Can my lineage be a possible subfaction to choose upon creating a new character if I get things right? Will there be places marked with history with the names of players? Will we be able to build castles and cities that could be defended/taken with a complex political system? Will there even be books that could be just like EVE ones? I know it would be a lot and ton of work to realise that, but I think this is a path in the gaming industry full of potential but still not really explored. And when I read about Deadhaus Sonata... This is exactly what I always wanted.

Live a story is cool, but be part of it in all manners cannot be compared.

I know I ask a lot, it's maybe even too ambitious for now, but a guy cannot be sure unless he asks. And who knows, maybe that could give you ideas for the future?
Reactions: Golden Xan

I'm fairly certain something like this is planned. Dennis mentioned something about an ages system, where periods of time will pass in game and stuff established by us in the previous ages become significant to new one.
Reactions: Golden Xan and Varik Keldun

That I understand, that is exactly why I created this thread.

I just want to know more

Heh, we all want to. ^^
I enjoy every idea they shared so far, but I honestly do not understand how everything will come together yet.

To be honest, I was somewhat drawn to EVE Online due to what you described, but I felt no such thing when playing the game. I wonder what Deadhaus will be like.

Well, EVE was a really hard game to play. You had to be perfectly coordinated with your team and it was really punishing. To make your name famous, I can't even begin to think what you had to do. The first real corporation to be powerfull enough to be mentionned in history was Band of Brothers and it took a full scale war of them versus the rest of the players to be destroyed and EVE was never the same after. it is that feeling that, I think, we both crave.

I fear that they will not be able to give all they promised us. It is really awesome, but that will be hard for them to make it happen like they want. I still have hope though.

@Cradlis Thank you for this excellent post. Both @Aaron Unger and I were huge EVE Online players. I played for about 8-9 years and @Aaron Unger much longer. I consider Eve Online one of the best games I have played (Top 10 of all Time) and the emergent gameplay and narrative are groundbreaking for the industry.

The quick answer is an absolute yes, in fact we plan to go much further than they did with Eve Online. In Deadhaus Sonata, by doing great deeds, your name will echo in eternity. We will have to strike a careful balance where you can still play the game single-player and have a great experience and yet be able to part of this emergent online world. All this will take time, Eve Online was not built overnight and it will take some time for us to get all this in but that indeed is the long term plan.
Reactions: Cradlis

Oh I can't wait to play! I arrived too late on EVE to be able to do something significant, but here with Deadhaus I can start at the beginning. That sounds crazy but for my character to be part of an official game lore is an old dream of mine that I can't wait to realise
Reactions: Golden Xan

@Cradlis : I embarked in the greatest space espionage operation of its time during the Band of Brothers era in EVE Online. I still occasionally get on EVE just for nostalgia reasons. No one would ever remember me in that game, because I was a "nameless director" who infiltrated and stole capital ships from the first great space empire in EVE online. It was an act that helped solidify the Norths soon to be dominant position over them. Even though I was fighting for my Northern brothers, the impact of what I did have such a profound effect on me that I ended up quitting for a short period of time due to guilt. I ruined the fun of others, it was great.

In creating such a long and lasting memory I shaped the narrative of the game, as well of my own experience in a way I will never forget. These memories are what makes gaming great for me, it is something that all of us at Apocalypse hope to achieve with Deadhaus Sonata. Wouldn't it be great if your actions in a game left a lasting mark such as the one I had with EVE? I think so. And I'm certain that @Denis Dyack and the rest of the team agree with me, because we have plans, *big plans*
Reactions: Golden Xan

And I can't wait to be part of your plans! Have my name remembered, my actions shaping the world! I'm glad to meet one of EVE veterans too

If you guys ever need help on something, anything, please ask us, or at least me. It's the game I've been waiting my entire life and I want it to be real and healthy
Reactions: Golden Xan