Alright not sure if this should be posted here or in Deadhaus General or something but here goes...

Now we know already that the UI (unless changed again later) is a non static HUD IE it will be animted and moving. The example we have is for The Vampire. It's UI is represented by their Messiah like entity The Red Lady(look subject to change I'm assuming/ who also may or may not still be "alive" frozen in a statue like state within a vampire temple, similar to The Parthenon/Lincoln Memorial...least that's my take) and for each class they will naturally be represented by other figures or symbology representing that class.

From left to right: the red orb corresponds to the material plane and physical form. The blue orb represents magickal power and ethereal form. And the green orb is tied to the soul, which is essence and essential form. 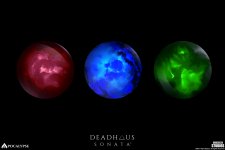 When the red orb is dominant, the vampire is in the physical state of being. It can apply physical force to the world around it, but is also vulnerable to physical attacks, such as from swords and claws. 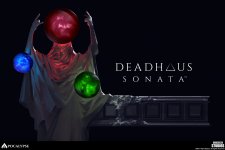 When the blue orb is dominant, the vampire is in the ethereal state of being. In this form, physical attacks from non-silver weapons cause no harm, but the vampire is still vulnerable to magickal damage. When the green orb is dominant, the vampire is in the essential state of being. As a naked soul, it must seek out a vessel to possess, lest it evaporate. 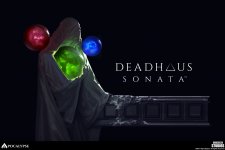 So far I think is a cool idea. It gives me OG Diablo vibes as well as throwing it back to Fantasy Empires a bit if you want to look at it that way.

And while this is all great... I cant help but wonder what a Diegetic UI would be like for this game.
How would it work? You have games like Dead Space where everything is integrated into the UI from the Health to the map, inventory screen etc. Also games like Metroid Prime where the HUD is part of Samus' helmet.

The only ways i can think of having something similar is if you have a destructible armor visual for when getting attacked. It starts to fall away or get battle damaged, you get scars on across your body etc.

when about to transition to the other magical state lets say, all that's left is your under armor or a light Gambeson. Magical State it's the same. More battle damage etc. Finally Essence State would be just fully naked as a the day you were born.

Another tricky part is how would it look if you heal yourself? does your armor fly back on fully repaired? is there still some light scuff marks to show that it was damaged before? etc.

I think God of War 2018 had a light gem thing to indicate high, medium, and low health if you were playing on the "immersive" mode. Maybe it was another game but a light gem hanging off the belt of strapped to a sheath indicated what State you are in would also help.

I think what games do now with the "oh no! im damaged so everything is turning red or black and white! " is lazy personally. There's better ways to go about it. A Diegetic UI would be great for people who wanted to play without any HUD or have as little HUD as possible(side note: being able to turn off any or all aspects of HUD is also welcome) but as I said originally, I'm cool with an awesome animated HUD as well. Just a thought.
Upvote 0 Downvote

Any time you mention dead space you are going to get my attention. One of my favorite games. I did love the HUD in that game but not sure it will work in DHS. Dead Space had a very close over the shoulder thrid person camera which allowed them to put the most important parts of the hud on his back. 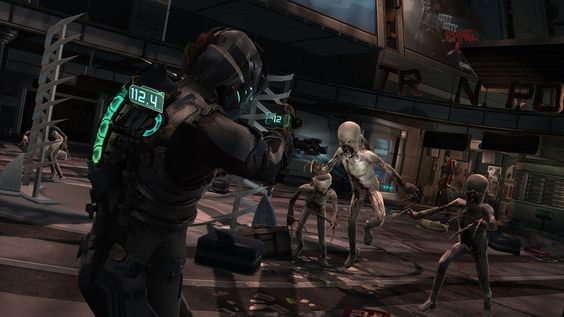 From what I have seen from the gameplay of DHS I don't think the PC will be locked into a similar position to allow for this type of HUD. You can see your character both from the front, either side and back. This will make it hard to do a HUD this way.

I do like your idea about seeing damage on the character though. I hate games that slow your character when they walk to show them hurt but then you have unlimited sprint. It has already been said that vampires will be slower in daylight. I could see some effects attaching to characters as they get weakened or change to a less effective state for them. Like a Revenant would lose a lot of damage dealing or tanking when not in physical form.

As to armor, we don't know yet if armor gets damaged. But it would be interesting to shows the armor in a few states as it gets damaged but that would have to be separate from health. Drinking blood should not fix a vampire's armor. In Too Human when you died your armor took damage and when it broke you lost its stats. I could see a similar thing here and you would have to go and get it fixed to repair it.
Reactions: Calypso

In the case of Deadhaus Sonata I don't think breakable armor to indicate health is a good thing as you would have to relearn what state means what for each armor set or cosmetic you might want to equip. If the character has a predetermined look I can see it working fine though. Perhaps there might be some common element to all armor that might be affected in a similar manner but that might be a design challenge as well. Generally having visually breakable armor in an RPG is quite a lot of work and IMO it doesn't have that much of an effect so I would not advocate for that system.

Generally some kind of aura vision might be a good solution - a faint glow in a certain color around your character for a brief time after you've been hit to indicate at what level of health you are at. Most games nowadays have some kind of "detective" mode as well that lights up interactive objects in different colors and that might bring up your health aura glow as well. You might even have the detective mode glow light up your enemies aura as well giving you a vague indication of their health levels as well. A fun thing to do with the auras might be seeing an enemy's aura flow into you if you feed with the detective mode on. Generally having the aura glow show on hit might get annoying if you have the hud up so you might want to make that optional in the settings menu as well.

As we are talking undead for now you might also do something... fun - have an increasing swarm of corpse flies around you as you come close to dying. Of course that would work only in the physical realm. Perhaps you could be seen leaking magic in the ethereal state either as gentle flows of mystical air or as fading sparks that fall off you and in the essential state your character might just... fade, become more and more transparent the closer it is to death.
Reactions: Livin and Calypso

Agreed. I think the breakable armor thing and damage would work better in a slower paced game for sure like Gryphon said and I like the detective mode aura idea. Maybe depending on how much freedom we are given with creator content I’ll make a slow burn of a single player level with all these thrown in.

One element is like to see is a physical map the player pulls out of there pocket or looks at on a war table when choosing locations to go to.
Reactions: Livin

Just gonna add a link to an early thread where this was discussed a little.

Fuel for the Fight

I've been thinking of some "battery" type sources for the class, things that can be held onto and used later. I designed them around the concept that you could carry as many as you could get your hands on but creating consequences for carrying more than you are currently able to handle. Also...

Livin said:
I'd like to give my two cents on this, if its even worth that much, and I'm aware others have already said similar things.

First off I think gender might be the wrong way to look at it, its more like an alignment.
If I understand the lore of this game the banshee isn't an undead that once lived a human life but rather something that manifested on the other side of death, so they aren't really even female or women but seen as such because they are feminine in form. With this in mind and depending on how extensive the character creator is it could be possible to create banshees that might be regarded as male; but I would also argue that they should be limited when it comes to what measure of masculinity is possible. This would enable what might be regarded as male to be possible among the banshee but limited to something affeminate, like a smooth skinned pretty boy.

Thats the way I could see it working out, either way I look forward to seeing them in the fight
Click to expand...

I guess it is time for me to get some sleep, thanks for the heads up.