Had this idea kicking around in my head randomly at work a few days ago. Figure I'll finally post about it since it can't hurt.

So Liches in Deadhaus, so far as I gather, will be able to summon thralls as part of their potential skill set. Among those thralls may be various helpful critters such as but not limited to:
Strong Skellyman (to tank the hits from foes)
Stabby Skellyman (to cut down weak enemies)
Mage Skellyman (to offer support magic for the master Liche or alternately to counter-spell/nullify enemy mages)

We've discussed in some of the devstreams the possibility of unlocking through challenges/events even yet more powerful (or just plain different) forms of skills to spice things up, and one of the things my mind randomly conjured was... 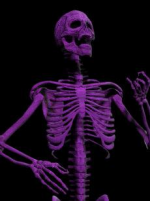 A purple skeleton named Withers. He's a unique set of bones that is highly charged with negative energy, and upon making physical contact with a foe, infects that part of them with negative energy, withering them as long as they're not a creature immune to it.
This would have two effects:
1. That part of the foe that was touched would be physically withered away and decayed and no longer useable
2. If the creature is living, they suffer negative energy impact to their life force which is drained away by the same amount as the strength of the touch attack (in other words they straight up lose maximum health for the rest of the battle, unless the effect is healed)

I imagine he'd be able to have his own mini-tree where he could be empowered to do ranged necrotic attacks after a time/training in addition to powering up the touch attack. He'd naturally be an invaluable asset against any close range focused foes, be they man or beast.