Lore of the Arena

This is a discussion about the arena "lore" wise. Not for ideas to improve it. For that forum head over to https://deadhaussonata.com/forum/threads/tech-demo-feature-suggestion-box.709/ for any ideas to improve or add to gameplay. This post is for discussing anything that may add to the lore of the place or if you think you have found some. We know that a certain someone is famous for hiding things in plain sight. So lets just see if we can see anything in all this shall we?

For me I've found a few things so far that I am curios about.

I found a broken sword that seems to be being honored in one corner of the room. The fact that it is on a banner means that it is precious to someone that honors that banner. Perhaps even that particular banner is important as well. 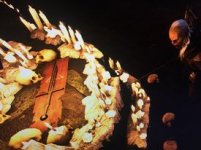 There is a similar spot in another part of the room, seemingly a place for something important but it is empty. 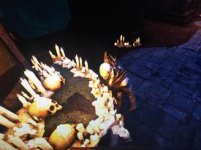 There are some shields on the ground that are a different make than what our current enemies are using. Have there been other fights here, and how were they "summoned" like the Legionnaires? 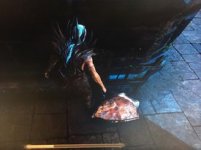 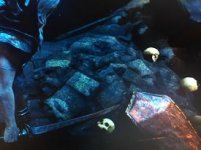 Why are the Deadhaus banners so old and tattered looking. Like they are VERY old, not just us old. Also doent red and gold seem more like a Thacean empire color scheme, or at the very least ANOTHER empire of the living?

Where does this door lead as it's not how enemies or we seem to get in? It also looks to be in better shape than much of this place. 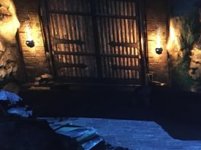 These cages are not just hanging around the arena they go off into the distance. There are 11 of them and they appear to hang over a very large canyon that goes pretty far back. They also only appear on the side where it looks like something broke down the walls... 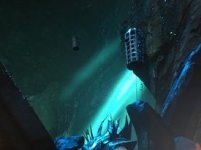 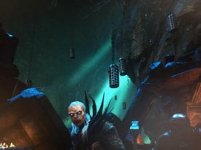 There are some bodies around that do not disintegrate like the bodies of the Legionnaires as well. Some with very interesting poses or accessories.

This one that is on what I call "The Bar" near the door and looks like they may have tried to skip out on a tab they owed. With an axe in the back and the splatter on the pillar someone may have been making "meat pies" down here. 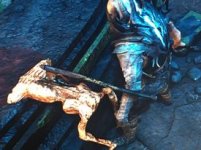 This one is to the left and behind the bar. Seems to again have a very different style of shield usually seen, also the sword used to kill them is left in the chest. 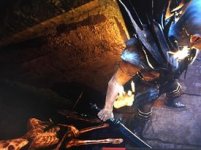 There is one in a small corner nook that appears to have at least died holding a loved one... 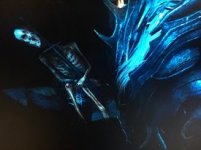 This one I found had been punctured many times by what may be arrows? The presence of the hooks means they were probably being used to hold this person up and they were removed after target practice was over. Perhaps to give the pin cushion hope? 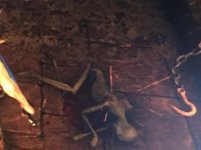 This last one appears to have been desperate to get away from this place, unfortunately they didn't make it too far. Or maybe something else entirely pulled a little too hard on its snack? 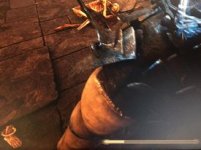 I will keep poking around to see what all can be found. If you think of any theories for these or if you find something else that I may have missed please drop a post and let me know.
Reactions: Temuldjin, Barkingworm, Purple Gryphon and 4 others

Sailor Midgard said:
I found a broken sword that seems to be being honored in one corner of the room. The fact that it is on a banner means that it is precious to someone that honors that banner. Perhaps even that particular banner is important as well.
Click to expand...

As I told you on stream when you showed it to me.... My guess is that it is a certain cursed blade that one Lord Lucian Armin caught and oh what dreams it brought.
again just a guess.... but it does seem important.


Sailor Midgard said:
Where does this door lead as it's not how enemies or we seem to get in? It also looks to be in better shape than much of this place.
Click to expand...

I do believe that Denis stated that would lead to our player housing.

Also as to one possible reason why the enemies burn off into nothingness, maybe it has something to do with the Phoenix and them dying and being reborn. phoenix rising again from its ashes... and what not.
Reactions: Temuldjin and Jaina Chaosweaver of Fate
Show hidden low quality content
Share:
Facebook Twitter Reddit Pinterest Tumblr WhatsApp Email Share Link
Top Bottom