After input from the illustrious @Golden Xan , I am pleased to announce a new kind of developer stream. Starting next Wednesday, at 4:00 PM EST, @Denis Dyack and myself will be hosting a Worldbuilding Town Hall on Twitch. The current plan is to stream this once a month and watch what kind of response it gets. Feedback will influence future streaming content directions.

The Worldbuilding Town Hall will discuss lore, classes, characters, stories, and overall worldbuilding elements at a level of depth that is suited for the more hardcore members of our audience. These sessions will have a literary and industry-minded focus, and a more serious approach to the topics therein. 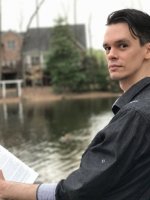 Jack Lindsey
Jack Lindsey is a writer and game designer based in Niagara Falls, New York. Jack is currently working for Apocalypse Studios remotely until the border situation resolves and he can join his brothers in arms in Canada!

Love it! Although I dont have the pleasure of getting to watch the streams live, I'm very much looking forward to this!!! Great idea!
Reactions: Denis Dyack

Barkingworm said:
Love it! Although I dont have the pleasure of getting to watch the streams live, I'm very much looking forward to this!!! Great idea!
Click to expand...

Is there a better time we should do this stream? @Jack Lindsey and I are flexible and can do this stream anytime, we chose the default time of our other streams but can do this both later or early in the day EDT. Let us know!
Reactions: Barkingworm and Faceless Mike

I'm good with the regular stream time as i doubt we could arrange a time that would best fit everyone.
Reactions: Jerion 'Wyverntamer' Kràl, Denis Dyack and Barkingworm
B

If you guys were to start the stream anytime after 6 PM EST, that would work. My schedule's kinda whacky these days, (as you might expect) so although I'd be working, I'd be able to join in and listen to you guys live! Having said that, I understand what Faceless Mike is saying as well. Assuming it caused no major inconveniences for anyone, that'd be ideal for me!
Reactions: Denis Dyack

Amazing! Sounds like a great idea, and I am looking forward to the first stream very much. I will leave here a list of questions about the world of Deadhaus for the first and future ones:

The tone for this stream was considerably different. I particularly enjoyed hearing the back and forth of ideas between Jack and Denis, and the opportunity of asking questions directly to you and being able to reply to your statements adds value to the experience.
However, in the back end, joining multiple rooms to queue for our moment of conversation can be a bit hectic. It requires us to manipulate both the Twitch stream and the Discord conversation, and also talk to Jalen and the other people on the queue before we get there, and this process makes us miss part of what is being streamed.
I expect that most people prefer to just type their questions and have them being read by someone. That should also minimize technical difficulties or confusions. Unless the process is improved, in some way, in which case interacting with the two of you can be maintained.

As a suggestion, for the next stream:
This way, there is no delay between the stream and the conversation, and you can have both means of communication with the viewers, and you maintain the same interaction level.

I also suggest potentially selecting one or more topics to talk about in the development of DHS that you are either struggling with or that you found particularly interesting to share with us and ask what people think (if you want to).
Reactions: Denis Dyack
Show hidden low quality content
You must log in or register to reply here.
Share:
Facebook Twitter Reddit Pinterest Tumblr WhatsApp Email Link
Top Bottom