This is just me rambling about ideas I have and if the creators want to use the ideas they are free too.

For the cities of Nogosaua I think it would be cool to have nine main cities which are based on the pillars of Nosgoth, what the pillar represents having an influence on the city and its inhabitants. These don’t need to be the only cities but at least the largest of the area. Here are the ideas I had.

The city of the mind.

Perhaps this town could be very spiritualistic, a whole city of monks like the air nation. All over the city there could be burning incense, chiming bells, and people meditating. The citizenry focusing on clarity of the mind and purity of the soul. I imagine body paint or tattoos would be a fun thing to have and you could subtly reference that human leader that was cut from the Soul Reaver game since she had mind control powers. I imagine some of the people would be trying to practice psychic powers. While not evil in any way their lack of concern at the evils all around is very off putting. The whole thing seeming very cultish.

The city of dimensions.

This city could be a little more ominous, with some hints of eldritch influence. The people would be obsessed with the stars, perhaps there could even be an observatory or at least numerous telescopes littered about. Crystals could be a popular choice for both decorations and accessories. Perhaps some mystics have crystal balls, and huge crystal sculptures. The people would gather in prayer and be very religious but what exactly do they worship? The whole thing having an even more disturbing cultish feel.

The city of conflict.

This is a pretty easy one to be honest with obvious influences from Rome. Squads of soldiers marching down the streets, statues of warriors from the past. Armored guards stationed at every street. An oppressive air of totalitarian authority permeates the city. The people focus on victory against the undead and glory to the cause. I feel a colosseum is a must in this town where the citizens watch as criminals, undead, a monstrous beasts fight to the death.

The city of nature.

This is another easy one to imagine. I picture a more rustic design for the city, like a puritan village. The people here live off the land and nearby forests. They are secretive and don’t like outsiders because living so close to the dangerous forests has made them paranoid. There would be lots of effigies and rituals to old forgotten gods of nature, old traditions like sacred herbs “garlic or something” hanging from the eaves of houses. Very creepy atmosphere like a terrifying Grimm’s fairytale.

The city of balance.

This could be the starter city or at least the largest human city or something. Being balance I don’t imagine it having any real theme, but perhaps it could have a secret underworld society where the undead hide amongst the living.

The city of energy.

This one could be a more modern city like Victorian England. It is the only city with electricity and is populated by academics and inventors. A large university and lecture halls to display new scientific marvels. Everyone here is obsessed with the new gadgets and technology being created here and they think of everyone from out of town as a stupid bumpkin. If there is any sort of a Doctor Frankenstein expy this would be a great place for him to live.

The city of time

This one was a little harder to think of, it could be more modern obviously but I think the main focus should be a huge clock tower in the middle of the city. Perhaps this should focus more on the people that will be punctual and busy. Perhaps it should be like modern society, people load into buses and travel to office buildings to crank away at there cubicles. I guess a more industrial design would fit, like the factories and offices of the industrial era and of course soul crushing monotony.

The city of states.

This would have some similarities with the city of energy but instead of science it could be more focused on art. This could be like the Renaissance with learned philosophers, and artisans. Many people having little alchemical labs set up in their homes, the more ambitious having large distilleries. There could be abstract sculptures and an outdoor amphitheater for plays. The people here having a more decadent and carefree attitude.

The city of death.

This is another obvious one unless you want to just make a huge vampire city. For a human city of death perhaps it could be a grave town where people sanctify the dead. It could have a giant church like Notre Dame. A mass graveyard bordering the town, which has mausoleums filled with corpses. The land is sickly and unwell, the people are glum and pessimistic. There could be wagons loaded with bodies sent from other towns or ones that need to be relocated.
Reactions: Ieliar and Denis Dyack

@Cacophonyx very interesting list . Perhaps maybe houses - as we already have the House of the Dead - Deadhaus . We have 8 other houses coming and some of these do indeed overlap but others are vastly different. Looking forward to getting your feedback on them.
Reactions: Ieliar and Livin
C

This was more ideas for the human settlements outside the Deadhaus but I admittedly don't know how this will work. Is the Deadhaus like a single omni dungeon, which can be altered by dungeon keepers and scales to your characters, or is it the only place you can explore like a miniature world.

I was trying to understand how the Deadhaus would function as a focal point if you have conventional towns, if there are no other dungeons it would need to literally be in the center of all towns, many entrances that all lead into the Deadhaus. Like if you go into the woods of the nature city you'll find a mansion in the woods that is connected to the Deadhaus. The Deadhaus being the spoke of the wheel in the map, but that's just what I thought off.

At this point, I think it's safer to classify Deadhaus as a faction rather than a location. This faction "owns" a certain region of the world of Malorum (no longer called Nogosaua), they exert control over some areas, and there are special locations within this region, but it is not a specific place. Take a look at this older map: 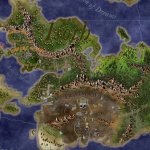 Denis Dyack said:
@Cacophonyx very interesting list . Perhaps maybe houses - as we already have the House of the Dead - Deadhaus . We have 8 other houses coming and some of these do indeed overlap but others are vastly different. Looking forward to getting your feedback on them.
Click to expand...

Which one does Gigahaus belong to, I'm leaning towards states based on our current speculation around it?

Edit
Although now that I think more on it, the fact it is called Giga does suggest they are possibly aligned with energy

Although now that I think more on it, the fact it is called Giga does suggest they are possibly aligned with energy

I just watched the Map Exploration video on youtube and some of the cities mentioned already would fit with my suggestions.

Thacean Empire is perfect for the "Conflict City." The forest north of Deadhaus if there is a town would match the "Nature City." The plague city would be good for the "Death City." I had thought about mentioning a plague, just to have an excuse for piles of bodies to be stacked up and a reason for the massive graveyard. It would also be a reference to the town from the original Blood Omen. I was also thinking the "Dimension City" could be built high up on the mountains since they would be a group of star gazers.