Greetings everyone,
This post is for a quick reference and for anyone who wished to check in or give feedback regarding the Q&A session Denis had on the livestream from 4th of August 2021 with community submitted questions regarding the new supporters packs that have recently gone live on the store. 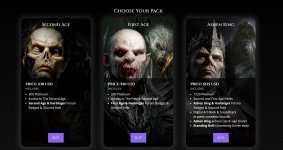 Apocalypse believes as a game developer that we work for the community, so if you have any feedback regarding the answers to these questions please let us know.
It is our goal to be consistent and transparent and serve you as a consumer and as a gamer.


Denis - Yes, That functionality is coming.


Denis - No, it cannot be bought separately, It will be part of the Ashen Ring pack. When we create a pack that item will be exclusive to people who get that pack.
Will there be similar items in the cosmetic store? Almost certainly, but that particular item we are keeping with the ashen ring.


Denis - Deadhaus Sonata is built around providing new ways of creating narrative and changing the way people play games. The idea is we are going to have a persistent universe and rather than even calling it alpha or beta, we are calling them ages because what people do in these ages will be recorded for all antiquity and after. So essentially if you do something in the first age, someone playing later in the 8th or 9th age will see there will be records of that but it will also contribute to the overall universe of the game.
Will we have stat resets and character resets and stuff like that? Maybe, but hopefully not, but I don’t know as there may be some things that may break but the idea is that it is not the intention but I would not want to never say never, but the intention is to always keep things going so if you end up levelling lets say your vampire which will be the first class and let's say for example you get to something like lvl 50 and we start the 3rd age and the game goes completely free to play and open to everybody, you’ll still be that lvl 50 vampire while all the low lvl’s are running around.

But it shouldn't matter as there won't be PVP as much, as that will be coming in the 4th age as we introduce a new house.

Though I do want to say that anything can happen but our goal is to start really slowly and build up to the point where basically the community says “we really like this, this is ready to go” then we can move forward, but if the community is really unhappy with the current state then we won’t move into the next age until we feel comfortable, and the goal is to Start with a Vampire, maybe introduce another couple of classes and I think the first classes slated are Vampire, Liche and Revenant for the target for the first age and then the second age we will introduce a few more and then when we go live we will have all seven, so that’s the goal.


Denis - No, the supporter pack items will be exclusive to getting the supporter packs. However, Are we going to allow people to buy the ashen ring pack with platinum, the answer is Yes. We have not implemented that yet. So as an example, earlier on I said if you get Malleus Odium you’re getting so much platinum that you won’t have to worry about other things, it’s up to a very large amount and the idea is, well it’s not implemented yet but it’s coming where we will do things like allow people to get the Ashen Ring pack through platinum, but it will be slightly different to what is offered now because when you buy a pack now with currency / money you are also getting platinum with that also so they will be separate and apart and this one will be “this is what you can get with Platinum” basically you can get all the things you would want with platinum. Now if you go and buy the Ashen Ring now and you have Malleus Odium then what you have is an extra log in as well as the plat you get, so you can get the plat that way and then we are figuring out ways in which you can gift that log in to a friend to let other people play.


Denis - That would be kinda like an upgrade, I think we could probably do that though I hadn’t thought about that. So you can upgrade now, so if you buy first age or second age which are similar with some slight differences to the founders packs Risen and Havok & Malice, so let's say you had Havok & Malice and you wanted to upgrade to a higher pack we could work that out, we will figure it out.

Denis - Yes. When we put the platinum store up, one of the first things we will allow is Ashen Ring, First age, Second age Buy with Plat.
So what we will do is we will take a similar equivalent to what is on the store now and allow you to buy that with Plat, and again why it has to be different is when you buy it with currency / money you get Plat so it has to be different and can’t be the same.


Denis - You would get the platinum for the Ashen Ring and you would have an extra log in for the first and second age that you could give to someone which we would figure a way to do that. Along with all the exclusive items and such of course along with the extra platinum.


If you want to check out the full stream on Youtube for yourself you can find it here: