Dragons in the world of Nosgoth

Well, I would like to know if the dragons were natural creatures of Nosgoth or if they came from another dimension?
What was the extent of your strength? What are your powers (If they had)? Did they speak or were they like ordinary animals? Did they have anything to do with Hylden or ancient vampires?

If your asking about the dragons revealed to us a couple weeks ago from the art update, they are for Malorum (the world of Deadhaus Sonata), and a future Haus in the game. If I remember correctly it was said they are from the East. but little has been revealed about them overall.

here is what was stated by Jack during the art reveal - "Though more than capable of traversing the seas between continents, dragons remain secluded in the eastern land of Atan. Whatever motivation hems them in the east is unknown, but they are deeply intelligent beings, capable of judgement and wisdom."
Last edited: Oct 21, 2020
Reactions: Cat2D

There is a dragon fossil in Blood Omen and Denis himself confirmed that there were dragons, but I wanted to know where they come from

well it looks like I know what I will be streaming tomorrow ^_^ time to seek out these fossils.... and possibly do a few speedruns
Reactions: Thaloriel

I think it’s in the Avernus catacombs, where Malek’s body is

Thaloriel said:
Well, I would like to know if the dragons were natural creatures of Nosgoth or if they came from another dimension?
What was the extent of your strength? What are your powers (If they had)? Did they speak or were they like ordinary animals? Did they have anything to do with Hylden or ancient vampires?
Click to expand...

Welcome to the forums @Thaloriel - Dragons and other world-building in the Legacy of Kain series took a significant direction change when Silicon Knights stopped working on the series. Most gamers are not aware that Amy did not write any of the original stories - she joined the project when all of that was complete. It does seem like a significant portion of the world-building in the series is largely done in the first game. After that, the new style of the narrative focuses on character development. This is not a criticism of the later stories, but rather a change of style to help put context to your questions.

There are many hints of Demons, Lovecraftian, and factions in Blood Omen: Legacy of Kain. The overall narrative for the Pillars of Nosgoth took a hard turn in a different direction after we left the series. I would sum up the change as my style of storytelling and world-building takes a very Tolkien like approach, while Amy and others Crystal Dynamics took more of conventional Hollywood or Aristotle's 3 act narrative approach to the story. Crystal Dynamics were never told where Silicon Knights were going to take the story.

The Dragon fossil your reference here: 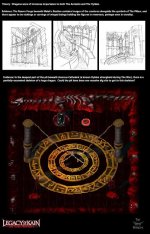 In fact, the main reason for Pillars was to deal with things outside of Nosgoth that were coming, the preparation of pillars and Kain. Of course, this direction was never explored and not possible without our involvement as Crystal Dynamics had no understanding of these concepts. Dragons were part of the past with somethings not yet explored in the future. The developments of Dragons as a race were never explored in the original game and I think it is best that I remain silent your other questions.