Official Poll: Which Class will you choose?

All of the classes have been revealed! 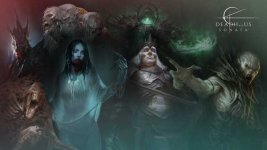 well I voted Vampire... but that's only because it leads to the more superior class... the werewolf...
Reactions: Denis Dyack and Cat2D

My first class will undoubtedly be a vampire
Reactions: Denis Dyack

I had to vote for Vampire as my Lord would never forgive me. Seriously, both the background and the leveling up of the character has caught my attention. So all said and done it had to be Vampire.
Reactions: Denis Dyack

Should be clear that this is the wight choice for everyone
Reactions: Big Haddy, Cat2D and Denis Dyack

I am happy not many are picking the Revenant. It will just make my character even more unique during the first age. But if we get into faction wars we will all have to band together to take out the Vamps first.
Reactions: Cat2D

This is a spiritual successor of Legacy of Kain, i felt compelled for my first character to be Vampire and so it will be.

My heart for now though is with the Wraiths, our lovely pain specialists. Death from the shadows by the hands of the shadows, it's almost poetic.
Reactions: Purple Gryphon and Jerion 'Wyverntamer' Kràl

I have to say the radio play for the Revenant has my curiosity peaking, a hulking silent beast that feeds off the pain of others and itself. I know it'll probably play like a tank but I'm hoping for a twist in the game play mechanics.
Reactions: Livin and Purple Gryphon

Whilst Vampire would be truly my first choice, I will say all of them. I wish to experience...all of them!

I'm definitely a more interested in melee combat so It's gonna be team Revenant for me with either vampire or ghoul as second pick.
Last edited: Mar 20, 2021

I'll eventually play all of them, but my first pick will likely be a Liche, with Vampire being my close second choice.
It's Liche because I've always wanted to play as a Liche in these kinds of inverted morality games (play as monster), but I'm torn because I know that Vampire's gonna be a lot of fun, too, given that I know that these vampires will be done correctly.
Who knows, I might fall in love with one of the other races that at first glance seem like that may be less interesting to play, like Ghoul or Wight, and end up maining them instead. That's why I've gotta play them all...intrigue abound!
Last edited: Mar 31, 2021
Show hidden low quality content
Share:
Facebook Twitter Reddit Pinterest Tumblr WhatsApp Email Share Link
Top Bottom